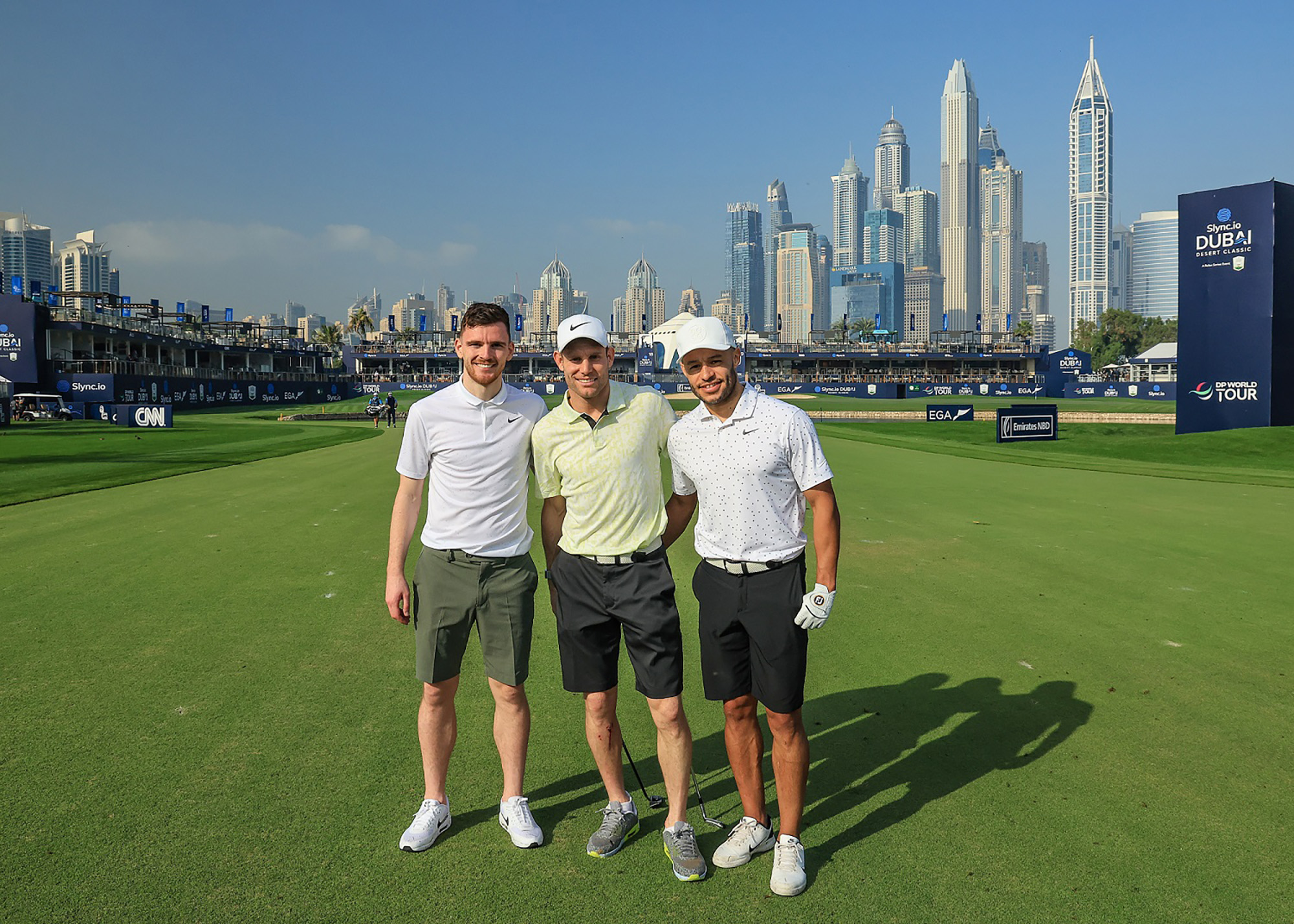 Already a massive draw in the golfing world, the Dubai Desert Classic has now proven a magnet for football's brightest talent after Liverpool FC trio Andrew Robertson, James Milner and Alex Oxlade-Chamberlain participated in the pre-tournament pro-am at Emirates Golf Club on Tuesday.

The English Premier League stars took part in a four-ball alongside 2011 Masters champion Charl Schwartzel, with Reds defender Robertson hardly able to hide his excitement at playing the Majlis Course in tournament condition and watching the sport's elite from inside the ropes.

"It was a pleasure playing with Charl, an amazing experience seeing how good he can play," said the Scotland skipper. "To play with the professionals is a real pleasure – and to be able to play the Championship course in this condition is wonderful."

When asked for his choice of champion for the 2022 edition, Robertson was torn between his playing partner Schwartzel and his compatriot Robert Macintyre, who finished third in last year's tournament behind England's Paul Casey and South Africa's Brandon Stone.

He said: "I hope Charl goes well now. That's the first time I had played with him and as a Masters champion he is an incredible golfer. But I also hope Robert Macintyre goes well for Scotland. Robert is doing Scotland proud in the golfing world and hopefully he can go on and win a couple of Majors."

Veteran England midfielder Milner said the chance to test himself against a professional was something special. "It was a good round, it is always class to play with the big guys in these events; to see how well they hit it and play the course," he said. "It's a great course here and a great set up, so it's nice to get out and have a swing and show what you can do on some holes – and embarrass yourself on some others!"

Milner had one moment of pride, when he matched South African Schwartzel on the iconic par-five 18th for a rare eagle.

"We both eagled, but our tees were set up a lot differently – the pros were teeing off way back," Milner added. "His second onto the green was a three wood from 260 yards and mine was a wedge after cutting off the corner [because of the shorter tee shot. It is great to see how the professionals hit it."

The Liverpool stars are in Dubai on a mid-season break and Milner is eager to see how the pros fare on the course later this week. "I'm going to try and catch a bit of the tournament if I can," he said. "The pros are unbelievably good, and it is great to watch them when you have played the course; to see how good they can play it. Dubai is such a great place to come, the climate is fantastic, and it is great for the family with loads of great restaurants."